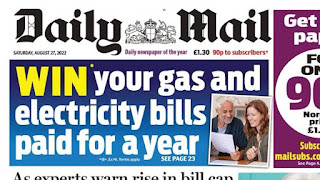 Imagine that this were happening under any other party. Or imagine that any other party were allowing one trillion litres and counting of human faeces to be pumped into the rivers and the sea, while suggesting that the vastly profitable, commercially risk-free companies responsible might have to charge even more than they already did. Or imagine that any other party were ... well, it is a very long list.
There would not be calls for a military coup. There would already have been a military coup. I am not joking. There really would have been. But the Conservative Party is different. It is special. It is not quite political at all. A couple of medium sized football crowds' worth of people whose money that private organisation had agreed to accept are therefore accorded the gold card citizenship that is the sole right to choose the Prime Minister.
For such payment, that right extends to children, to foreign nationals, to long-term expatriates, to incarcerated convicts, and to people who have never set foot in the United Kingdom, all around a core of the affluent elderly to whom Liz Truss has promised tax cuts while funding their sweeties out of borrowing, leading to astronomical interest rates to the benefit of savings account holders who had paid off their mortgages decades earlier.
This would be just as objectionable in any other party, but only the Conservative Party has ever done it, this is only the second time, and the first was only three years ago. This is no pillar of the Constitution. If any other governing party attempted it, then there would be a military coup. I am not joking. There really would be.
Posted by David Lindsay at 2:17 am