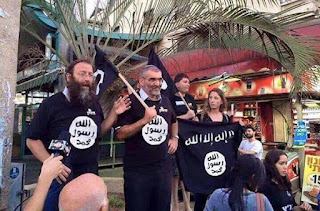 These are right-wing Members of the Knesset, demonstrating in support of IS because it is at war with Hezbollah.

But where is Owen Smith? Brushing up his knowledge of Taylor Swift and Justin Bieber, no doubt.

Whatever you do, don't tell him about this:

"The Bob Crow Brigade (BCB), a group of British and Irish volunteers fighting in northern Syria named after a famous British trade union leader, are edging closer to the Islamic State stronghold of Raqqa."

Today, I am more convinced than ever of the need to get George Galloway back into Parliament as soon as possible.

And of the need to get as many as possible of our people into Parliament in 2020.

And of the need of our own mass media.
Posted by David Lindsay at 1:46 pm