Trying to sell himself as honest is not going to work for a man who lied his way to the Labour Leadership, or who lionised Tony Blair, or who used to head the Crown Prosecution Service. "Boris Johnson is a liar" is not exactly news. And anyway, Keir Starmer, so are you. At least Johnson is not a hypocrite.
If you were wondering why a Conference that had unanimously passed a motion for a minimum wage of £15 per hour then gave this teenage fangirl reception to Starmer, then they were largely not the same people. Starmer's audience was packed with bussed in day visitors, although even then the hall was far from full, with no one in the galleries, which are normally packed for the Leader's Speech.
One of the wicked hecklers called for a minimum wage of £15 per hour while Starmer was blathering on about the dignity of work without mentioning any specific policy. That was quite a courageous act, because there were armed police at the end of every row. Not even Blair used to have that, and in Opposition this is purely a private event. Yet there they were, literally ready to shoot any "terrorist" who had really stepped out of line.
Having voted against it purely because of Sarah Everard, Starmer, who already uses armed police for internal party enforcement purposes, has no intention of repealing what would by then be the Wayne Couzens (Further Empowerment) Act. Thank goodness that that will only ever be an academic point, since he stands no chance of ever becoming Prime Minister. 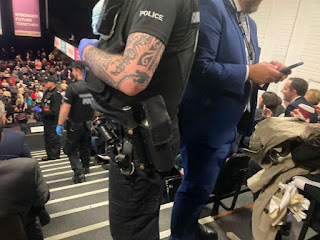 Posted by David Lindsay at 8:34 pm