No one in Russia or Ukraine thinks that Russia is about to invade Ukraine, but who is asking them? "At any time" is doing an awful lot of heavy lifting here. The imminence of this invasion is intended to be permanent, as the pretext for any and everything.
Although we should have nothing to do with the other side either, NATO's support for the likes of Svoboda, Pravy Sektor and the Azov Battalion is entirely in keeping with its history from the very start. Almost immediately after the Second Wold War, the new enemy was declared to be the Soviet Union, so that anyone who was sufficiently opposed to that was welcomed with open arms.
Thus, very recent senior Nazi Officers were central to the foundation of NATO, the sainted Attlee Government imposed austerity at home in order to go to war to restore the rule of Nazi collaborators in Greece, Western intelligence agencies were replete with old Nazis throughout the Cold War, and often quite senior German Nazi scientists, technicians and engineers were integrated into United States government agencies, notably NASA, through Operation Paperclip.
Having taken in only 10,000 Kindertransport children, Britain took in 15,000 Nazi collaborators, one and half times as many. 1,000 Kindertransport children had been interned as enemy aliens, and some of them had been sent as far as Australia and Canada to get rid of them, but there was none of that for the 14th Waffen Grenadier Division of the SS (1st Galician).
Those were ethnic Ukrainians from a formerly Austro-Hungarian area that had been incorporated into Poland after the First World War, meaning that they were able to claim pre-War Polish nationality in order to enter Britain even though they had massacred ethnic Poles during the War. It had in fact been Churchill who had handed Galicia over to Stalin, but that did not stop many of the 1st Galician from making their way to Britain. After all, it was by then Attlee's Britain.
If anyone had had any doubt who they were, then they had openly worn their SS uniforms as early as the 1950s at events organised by their old comrades' organisation, the Association of Ukrainian Former Combatants in Great Britain. Into the twenty-first century, that Association appears to have been laying at British war memorials wreaths to the fallen of the Battle of Brody.
Certainly, the AUFCGB has erected a number of monuments in this country, where they are fairly unobtrusive, although some of the ones to the same Division in North America are enormous. This is the one at Cannock Chase, with the currently familiar Tryzub alongside the ever unmistakable Iron Cross, and with the inscription first in Ukrainian, then in German, and only then in English. Yes, that does say 1986. 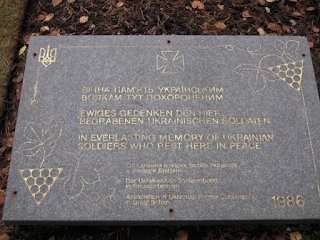 On Sunday 16th November 2014, the AUFCGB, by then under people who must have been too young to have fought in the Second World War but who were clearly in sympathy, marched openly from Trafalgar Square to the Cenotaph, where it laid this wreath. To a Division of the SS. At the Cenotaph. One week after Remembrance Sunday.

In order to present Russia as having always been the enemy, NATO publications in Eastern Europe routinely portray Wartime collaborators as heroes and freedom fighters, with, for example, their successors among the signatories to this. And that is before we even start about the Second Front in the Third World War, the one against China, with which we should also not be siding. If you need to look up Nippon Kaigi, then please, please do.
Japan is already run by people who believe, "that Japan should be applauded for liberating much of East Asia from Western colonial powers [a widespread view in several of those countries at the time and since, by the way]; that the 1946–1948 Tokyo War Crimes tribunals were illegitimate; and that killings by Imperial Japanese troops during the 1937 Nanjing Massacre were exaggerated or fabricated," as well as that the comfort women were not coerced. But then, look who runs Hungary. In NATO. And look who NATO is backing in Ukraine.
Posted by David Lindsay at 11:17 pm