An Assessment of The Impact

Name the Shadow Chancellor of the Exchequer. I bet you can't. Or if you can, then you have no idea what her opinion is on any subject. Meanwhile, this is how John McDonnell is marking his seventieth birthday today, and Bernie Sanders's eightieth. Although this is primarily Richard's amendment. Richard is on a roll towards a role. 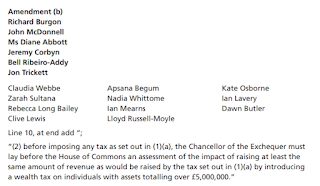 No one who was not already avoiding tax would bother to do so merely in order to escape a tax of, say, 10 per cent on their wealth above five million pounds. Still less would they flee it by fleeing the country. It would hardly be the threat of the poorhouse.
But it is good to see that the wider problem of tax avoidance is being acknowledged by those who had never previously accepted that it was a problem at all. What is the point of tax avoidance? If you can afford to do it, then you would still be rich if you didn't, but you would be able to enjoy your wealth in a far more civilised country.
Posted by David Lindsay at 2:15 pm